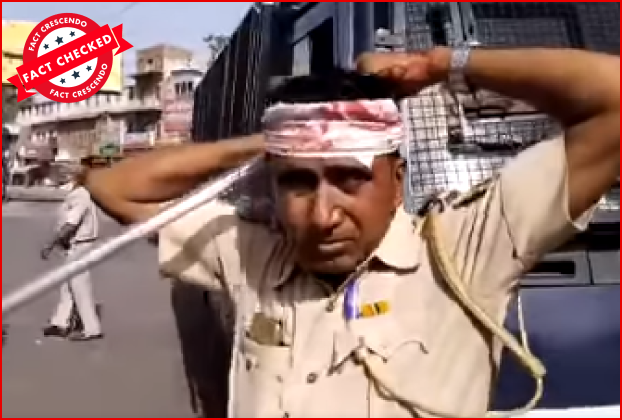 ASI Dhannaram sent us the images of his injuries and confirmed to us that he had suffered injuries on his head and hand during the communal clashes at Jalori Gate in Jodhpur.

Users are pointing out that there are no signs of blood on his forehead or on his hands.

The video shows a newspaper cutting with the image of this police officer with a handkerchief on his forehead stating that it is an incident from the recent communal clashes in Jodhpur, Rajasthan.

Communal clashes gripped Jodhpur on 2 May after the hoisting of Islamic flags at Jalori gate before Eid. The viral post is circulating on social media in the backdrop of the recent communal clashes in Jodhpur.

The caption of the video states, “In this video, the handkerchief policeman he is using to tie on his neck is red in colour. There is no blood on his forehead but there is a colour on his handkerchief. We do not know what that red colour is. However, you can clearly see that the police officer is in good health. He has no injury of any kind. However, the newspaper has published a picture saying the police officer is injured.”

We started our investigation by running a keyword search on Google that led us to a tweet by Jodhpur Police on 6 May 2022.

Sharing the viral images on their tweet, Jodhpur Police mentioned the viral post about ASI Dhannaram during the Jalori Gate incident is misleading.

ASI Dhannaram was injured in the head and hand during the clashes, which is why he had blood on his handkerchief. After the incident, the ASI was taken to the medical and later an FIR was registered at Sardarpura Police Station.

Upon carefully observing the video, we found injury marks and blood on ASI Dhannaram’s hand.

Fact Crescendo contacted Assistant Sub Inspector Dhannaram who confirmed to us that the viral post is false and misleading. He told us that he was genuinely injured during the communal clashes at Jalori gate and he received injuries on his head and hand.

He had cleaned the injury with his handkerchief first and then used it to tie it on his head. That is why there was blood on his handkerchief. He also told us that he was also taken to the medical after the incident and his reports are submitted to the police station.

ASI Dhannaram also shared a clearer image of the injuries on his head. We can clearly see the blood on his head.

Fact Crescendo found the claim made along with the video to be Misleading and False. ASI Dhannaram confirmed to us that he had suffered injuries on his head and hand during the communal clashes at Jalori Gate in Jodhpur.

Title:Rajasthan police officer did not fake his injury During the Jalori Gate clash 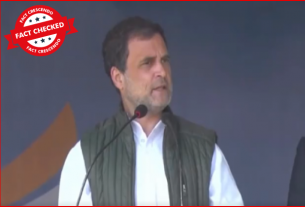 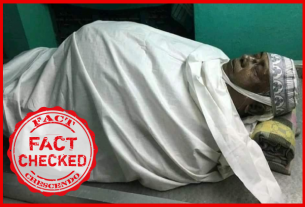 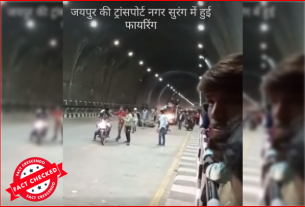