The images are old and unrelated to the Tripura violence. The images are not from Tripura. They show fire-engulfing in factories and warehouses in Uttar Pradesh

In the wake of communal violence that took place in Tripura recently, the social media is inundated with videos and photos purported to be from Tripura. Among these are a set of images circulating on social media showing few men trying to douse a huge fire in shop. The social media users claim that the images are from Tripura’s panisagar where an electric supply shop and a paint and grocery shop of owned by Muslims named Aamir Hussain and Amiluddin was set on fire. The post further claims that the shop owners have suffered a loss of 12 to 15 lakh rupees. The incident has allegedly taken place in front of the police. The images claim to show the atrocities that are being carried out in Tripura against the Muslims.

The caption of the post translated from Hindi states that “Why is the news of Tripura not seen in the media, is it outside India? Aamir Hussain’s electric goods shop and Amiluddin’s paint and grocery shop burnt in Roa Panisagar of Tripura. Both have suffered a loss of 12-15 lakh rupees. Allegedly this happened in the presence of police. No one has been arrested yet. #SaveTripuraMuslim” (sic)

We started our investigation by running a Google reverse image search on the images and found that the first image showing men putting out a huge fire published on a website Inextlive.com in the year 2016. According to the report, a cotton warehouse in Naveen Galla Mandi in Gorakhpur in Uttar Pradesh caught fire due to short circuit. The owners of the warehouse had to face immense loss due to the fire. The reports also state that the fire brigade arrived 3 hours after the incident.

Amar Ujala published the second image on 2 July 2019 stating that the image is from Noida where two factories caught fire resulting in heavy losses for the owners. The incident took place at a plastic granule-making factory in Phase 2 situated in Noida Special Economic Zone. According to the Chief Fire Fighting Officer, Arun Kumar Singh said that there is a Plastic Processors Export Private Limited Company on plot number 24A in NSEZ where plastic granules are made. A fire broke out in a part of the factory around 3 pm on Monday (1 July 2019). Patrika Noida also published the video of this incident in 2019 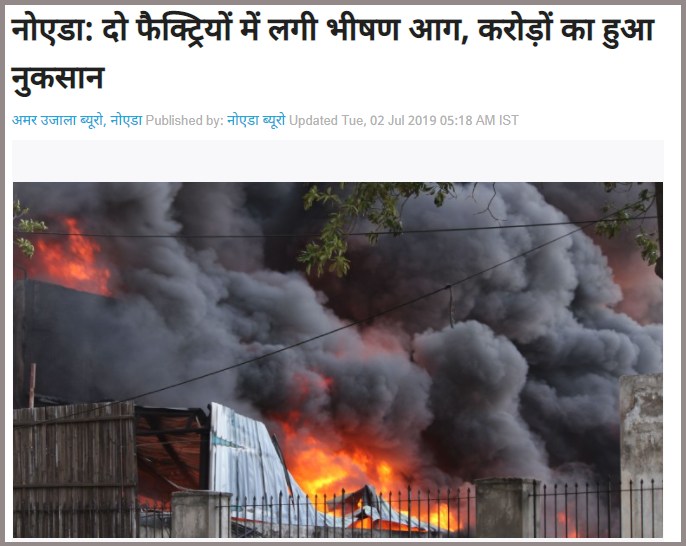 Fact Crescendo found that the images viral on social media are being shared with false claims. The viral images purported to be of attacks on Muslims in Tripura are old and from Uttar Pradesh. The images are not related to the ongoing Tripura violence.

If you find any such photos/videos forwarded to you on WhatsApp and you are suspicious about it, then forward such content to us on our FactLine Number +91 9049053770. Our team will verify the content for you and tell you whether it is true or false.

Title:Old and unrelated images shared as recent attack on Muslims in Tripura

No Movie Named ‘The Omicron Variant’ Was Released in 1963; Altered Photo of Another Movie’s Poster Shared With Misleading Claim…

Image of Satyajit Ray with a luxury car is digitally edited

FACT CHECK: Viral image of a woman with a toddler is not a painting by “Ravi Varma”

Was a 201-year-old monk discovered in the mountains of Nepal? Know the truth…