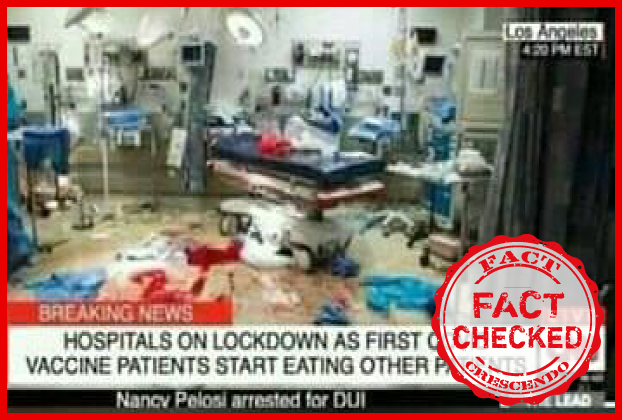 The entire world is waiting to get their hands on the COVID-19 vaccine which is supposed to put an end to the gloomy pandemic days. Amidst this a viral image social media claims that the new vaccine is turning people into zombies who have now started eating each other.  A screenshot of a television news bulletin which shows a hospital ward with blood spilt all around is being widely shared on social media. The image has a ‘CNN’ logo and a ticker which reads, “Breaking News: Hospitals on lockdown as first Covid vaccine patients start eating other patients.” The image also has a scroll at the bottom which reads as, “Nancy Pelosi arrested for DUI”. The top right corner of the screenshot has the text “Los Angeles 4:20PM EST”.

We started our investigation by running a reverse image search on Google which led us to a news report published by The News York Times on 14 February 2019 where we found the viral image with the caption “”The trauma bay in the emergency department at Temple University Hospital after resuscitation efforts failed.” The picture has been credited to Eric Curran, a medical student. In the article, Eric has described the heart-wrenching experience of handling and treating the gunshot victims.

Next, we searched for CNN’s news report on this incident however we did not find any news report claiming that COVID-19 Vaccine is turning people into zombies. Thus, it is clear that the CNN logo was digitally edited.

On further search, we found the viral screenshot in a meme website ifunny. A user who goes with the username ‘flabbyankle‘ had shared the viral picture on this website recently. This image was picked up from this meme website which was later shared on social media which the users believed to be true.

Conclusion- Fact Crescendo found the above-mentioned post to be False. The viral screenshot that carries a CNN logo is morphed. The image is from 2019 and is related to the treatment of gun violence victims in North Philadelphia, US. The image does not show COVID-19 vaccine recepients turning into zombies.

Title:Fact Check- COVID-19 patients are not eating up other patients after the vaccine shot 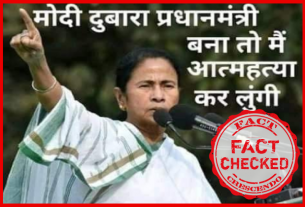 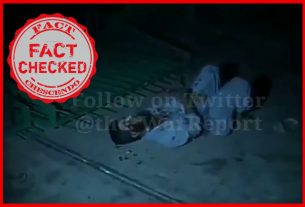 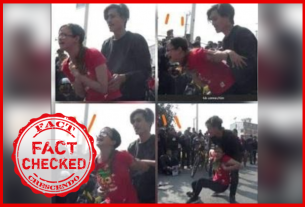