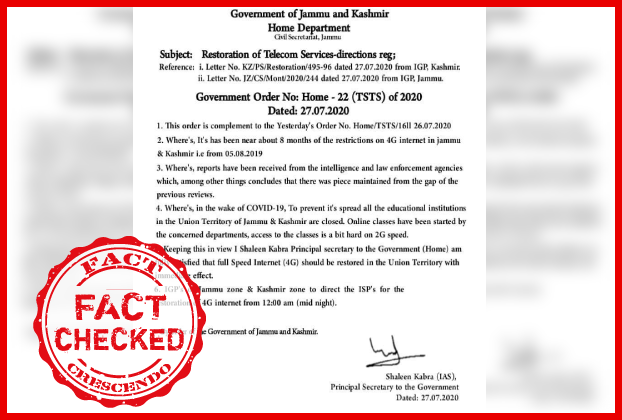 Due to this reason, keeping in view the circumstances, it has been directed by Principal Secretary to the Government Shaleen Kabra, through a government order, that the services of 4G Internet in the Union Territory will be activated from 12 noon (27/07/2020) tonight. This order has also been shared on Facebook.

We started the investigation by looking closely at this alleged order issued by the Jammu and Kashmir government. In this context, we found many grammatical mistakes in this order written in English, we noticed that often capital letters are used in between sentences. Also, many proper nouns have been written in lowercase letters. Below you can see the mistakes found in this order.

After that we used the keywords on Google and searched for the related news. As a result, we received a tweet published by SP of Kashmir Cyber Police Tahir Ashraf on his official Twitter account, in which he described the above order as fake and unreliable. He has also written that no such order has been issued by the government.

PIB Jammu and Kashmir, through its official Twitter account, also denied the fact that this order was fake and wrote that “This order is fake and no such instructions have been issued by Principal Secretary Home, Jammu & Kashmir”.

Apart from this, we received an order issued on the official website of the Home Department of Jammu & Kashmir on 29th July, 2020 According to this order, the Government of Jammu and Kashmir has extended the ban on high speed internet 4G services in Jammu and Kashmir till 19 August, 2020. Due to this, the internet speed will be limited to 2G only.

PIB Jammu and Kashmir, through its official Twitter account, also denied the fact that this order was fake and wrote that “This order is fake and no such direction has been issued by Principal Secretary Home, J&K”.

Internet was banned in Jammu and Kashmir when Modi Government withdrew the special status of the state provided under Article 370 on August 5th last year. It was restored as a Union Territory. Although high-speed mobile internet is still suspended there, but 2G speed internet is available for post-paid and fixed-line customers whereas pre-paid customers can get internet service after verification for post-paid service.

Conclusion: We found the above post wrong after checking the facts. Regarding the restoration of 4G internet services in the Union Territory of Jammu and Kashmir, the orders spread in the name of Jammu and Kashmir Principal Home Secretary, Shaleen Kabra, are fake. No such orders have been issued.

Title:Has 4G internet Service been restored in Jammu and Kashmir? Know the truth : 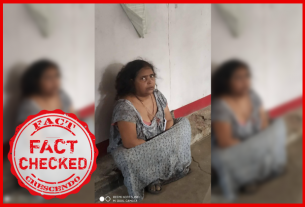 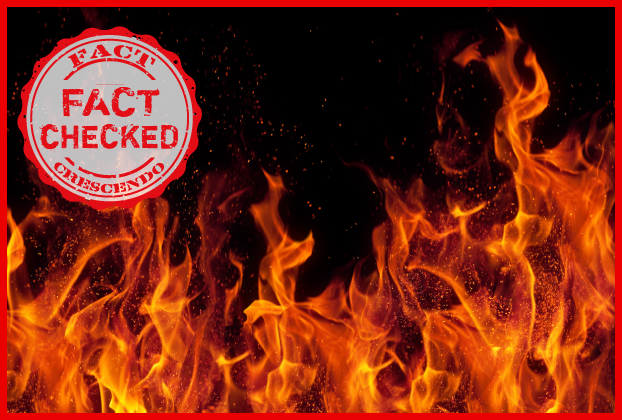 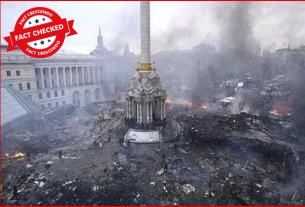