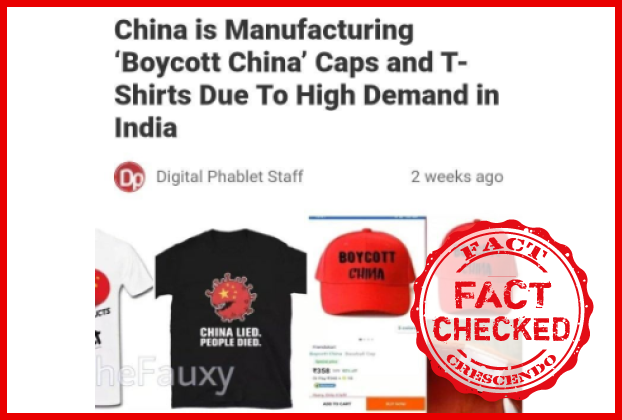 With increasing tensions between India and China, thousands of people in India have started a movement to boycott of Chinese products. Social media is flooded with images of Indian’s throwing away any Chinese products in support of the movement. With every passing day, the boycott Chinese products movement is getting stronger we found posts showing ‘Boycott China’ merchandise circulating on social media claiming that China is manufacturing these goods to cater to the swelling demand in the Indian market. The image shows T-shirts and caps with “Boycott China” and “China lied People died” printed on them. The post mentions “China producing ” boycott China products T-shirt n caps” due to high demand in India.”

We can also see the watermark of “The Fauxy” on the bottom left corner of the image. When we searched for “The Fauxy” on Google where we found an article published by their website on 1st June 2020 about ‘Boycott China’ products. The article said that ‘Boycott China’ products are being manufactured in China. We looked up for more information about the website and found their Twitter and Instagram handles. According to the social media handles of the The Fauxy their bio mentions that they are the Fastest and Fictitious News Source in India. This clearly means that any piece of information mentioned on their website cannot be trusted and they are not factually accurate.

A further search on Google led us to the tweet published by the Global Times which is China’s national English language newspaper on 23rd June 2020. The tweet mentioned “The ‘Boycott China’ items in #India were not made in #China, insiders said, analysing that it might be Indian sellers who printed the slogans on the plain T-shirts and caps that were imported from China.”

Global Times has also published an article clarifying that “the ‘Boycott China’ items in India were not made in China. The article also mentions that Song Chen (pseudonym), a manager at Yiwu International Trade City, told the Global Times that One possibility is that, Indian sellers printed the slogans on the plain T-shirts and caps that were imported from China. Several textile product exporters told the Global Times that they have neither made nor sold any ‘Boycott China’ items. According to the report, Chinese laws and regulations prohibit the export of products promoting anti-China sentiments.

Conclusion– Fact Crescendo found the above-mentioned post to be False. China is not manufacturing ‘Boycott China’ merchandise for the Indian market. The website which had originally published the article is not an accurate one and clearly states that they publish fictitious news which means that they do not published authentic content.

Title:China Did Not Manufacture “Boycott China Merchandise” Due To A High Demand In The Indian Market. 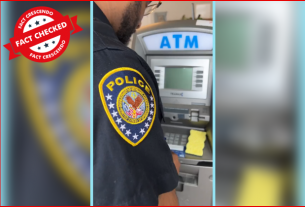 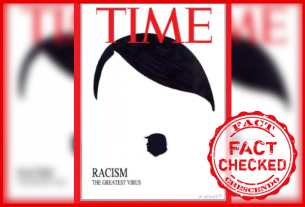 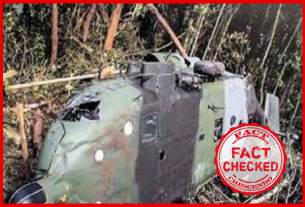