The video originally shows demonstration by women in Chile to protest against the repression in 2019. This video has no relation with the recent anti-hijab protests in Iran.

Users claim that this video, which shows Iranian women protesting topless, is part of an anti-hijab demonstration in Iran.

This video is circulating on social media on the background of the anti-hijab protest that has erupted across Iran following the death of a young woman named Mahsa Amini  in the custody of morality police after her arrest for not wearing the hijab properly.

The caption of the post states, “Anti Hijab protest now escalated to a Topless protest in Iran. From removing of the hijab to throwing of the hijab into fire of hijab and from opening of the face, it went further to the opening of breasts till the waist!! And latest, it went total nudity. Hijab se Azadi.”

We started our investigation by running a keyword search on Google, whose results led us to a news report published on 26 November 2019 by El Cooperante. The caption of the report states, “The strange protest “naked” of young people against Sebastián Piñera.” A group of feminist women held a striking protest in Chile, within the framework of the social conflict in the South American nation against President Sebastián Piñera.

According to the ADN Radio report, 59 days after the protests in Chile on 18 October 2019, the people took to the streets to demonstrate against the inequality that afflicts the country, a powerful representation of the abuses committed by Carabineros in the arrests that took place in front of the Catholic University.

In the video, a giant body of a carabinero is seen firing his weapon at women who escape naked from the uniformed officer. Behind him, a large figure of President Sebastián Piñera controls the strings of the police officer.

You can read another news report on this incident here.

Below you can see the Google Street View of the street where the demonstration took place in 2019.

Fact Crescendo found the claim made along with the viral video to be False. The video does not show Iranian women taking part in the anti-hijab protest. The video originally shows a demonstration by women in Chile to protest against the repression of the then President Sebastián Piñera and the national law enforcement police in 2019.

Title:2019 protest in Chile shared as naked women protesting in the anti hijab demonstration in Iran. 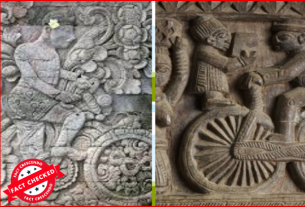 Did Bicycles exist in India 2000 years ago? Here is the truth behind viral image of TN temple carvings… 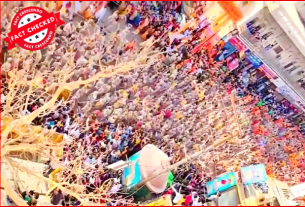 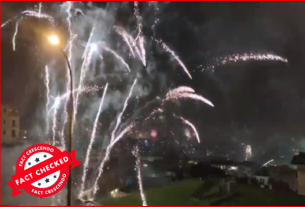