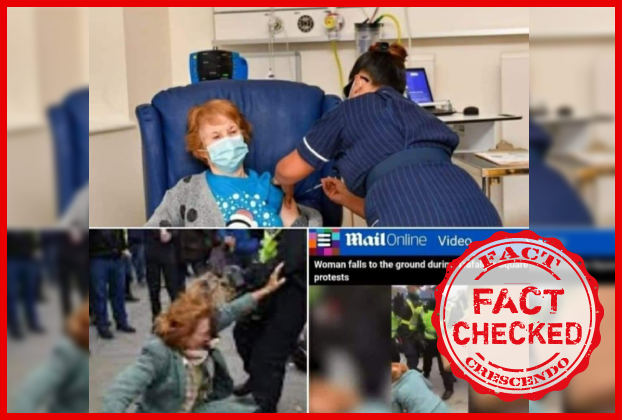 90 year old Margaret Keenan became the first recipient of Pfizer’s Covid-19 vaccine in the UK on December 8, 2020. Amidst this a story is being shared claiming that a crisis actor named Liz Scott allegedly received the first shot of the Covid-19 vaccine by impersonating Keenan. Social media posts also claim that Margaret Keenan died in 2008. Along with the crisis actor theory, a collage of pictures of a woman falling to the ground and Keenan receiving the vaccine shot is also being shared. The picture of the falling lady has the text, “Woman falls to the ground during Trafalgar Square protests”.

The caption of the post mentions, “Meet Liz Scott, a well-known crisis actor. Also showing her illuminati hand sign after she had her jab. Today she acted as a 90-year-old  by the name of Margaret Keenan, a lady who died in 2008. But here she is taking the first c19 va x, live on TV for you to see.”

We started our investigation by running a keyword search on the crisis actor on Google. We found that a crisis actor is a trained actor engaged to portray a disaster victim during emergency drills to train first responders such as police, fire-fighters, medical personnel, etc.

As per the official press release of the ‘United Kingdom National Health Service’ Margaret Keenan is a former jewellery shop assistant who retired four years ago and will be turning 91 years old soon. Upon running a keyword search we found that Margaret Keenan appeared for several media interviews after taking the COVID-19 Vaccine. Thus, we can ascertain that the claim of Margaret being dead since 2008 is False. You can view her interview with Reuters on 8th December 2020.

While in most photographs, Margaret Keenan is seen wearing a mask, “NHS England and NHS Improvement’s” official Twitter account posted images of her face which is clearly visible.

The viral image of Margaret Keenan receiving the vaccination is available on AP Image on 8th December 2020 with the caption “90 year old Margaret Keenan, the first patient in the UK to receive the Pfizer-BioNTech COVID-19 vaccine, administered by nurse May Parsons at University Hospital, Coventry, England, Tuesday Dec. 8, 2020. The United Kingdom, one of the countries hardest hit by the coronavirus, is beginning its vaccination campaign, a key step toward eventually ending the pandemic. (Jacob King/Pool via AP)”

Who is the lady who fell on the ground?

The picture of the lady falling to the ground, which has been shared in the viral claim, has the text, “Woman falls to the ground during Trafalgar Square protests”.

We started searching this text on Google and found a video report by “Daily Mail” published on September 27, 2020. The woman is initially seen standing on a chair. Later one can see that she falls down in a scuffle with policemen. According to the news report the demonstration shown in the video were started by anti-lockdown protesters which took place in London’s Trafalgar Square. The picture of the lady used in the viral post is a screenshot from this video.

Upon searching further we found clear pictures of the same lady falling during the Trafalgar Square protests on “AFP Forum”. The caption on these pictures mention that, “A woman gestures after falling as police move in to disperse protesters at Trafalgar Square in London on September 26, 2020, at a ‘We Do Not Consent!’ mass rally against vaccination and government restrictions designed to fight the spread of the novel coronavirus, including the wearing of masks and taking tests for the virus.”

Who is Liz Scott?

Upon searching about Liz Scott along with keywords such as crisis actor we found her profile on “starnow”, which is a casting platform for actors, models and musicians. Here, she has described herself as an actor, extra and model from London.

Comparing the two women, one can easily figure out that Liz is much younger than Keenan. One can clearly spot a difference between Liz and Margaret Keenan.

The woman falling on the ground is not Margaret Keenan since she supports COVID-19 vaccination, which she has mentioned in several of her interviews. She clearly said “Go for it” when asked about the vaccination.

Title:Pfizer’s first COVID-19 Vaccination in UK was not staged 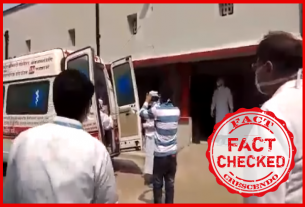 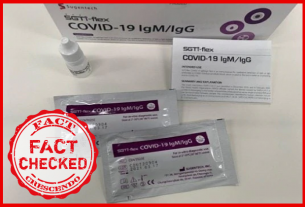 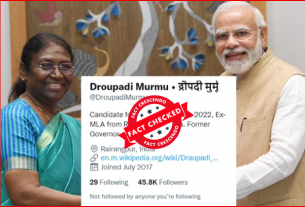