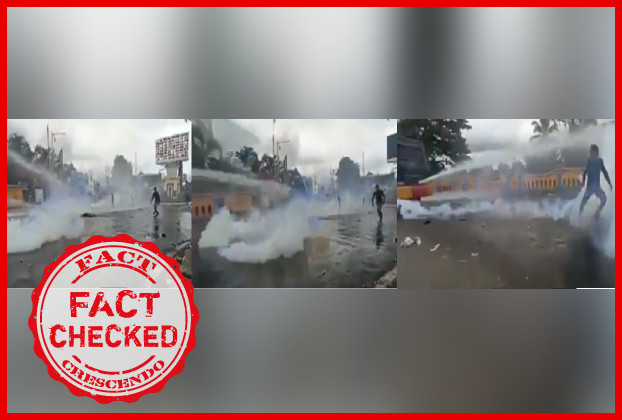 In a conflict, the Bharatiya Janata Party (BJP) and Akhil Bharatiya Vidyarthi Parishad activists clashed with the police on October 8th during a march at the state secretariat, Nobanno in Howrah district of West Bengal. Meanwhile on social forums, a video of a person seen kicking a tear gas box thrown by the police is being made viral with a claim that this video is from a clash between the BJP and the police in Bengal, where a BJP worker is seen kicking a tear gas can.

“Salute to BJP workers in West Bengal! It is as if they are fighting at the border with armed enemies youth activists kicked Smoke Bob in the pavilion. “

We started the investigation by breaking this video into small frames with the help of InVID V Verify tool and then searching through Google reverse images for these frames. The result revealed a video aired on 8th October 2020 by a Facebook page called Redfish, according to which, an Indonesian protestor is kicking back a tear gas canister while escaping from water cannons.

Subsequently, we found this video uploaded on YouTube on 8th October 2020, the title of the video has been written in Indonesian language as “#Viral #beritahariini Latest News – Jebreeettttt…. Students demonstrators kick back tear gas.”

The quality of both the above videos is much clearer and a few seconds longer than the viral video. After looking carefully, we see a truck with “POLICY” written in English. After searching for Indonesian police truck using keywords on Google, we saw pictures similar to the truck seen in the video. Below you can see a comparative analysis of the pictures of the truck and Indonesian police truck shown in the video.

Through keywords on Google, we found news published by Aljazeera stating that there were nationwide protests against a new employment law in Indonesia on October 8th, Thursday for the third consecutive day.

According to a website called Read.id, it has been written in Indonesia language that this video is about a protest against Omnibus law in Gorontalo, which you can see below.

In the video below you can see the location of the demonstration in Gorontalo through Google Street View. The demonstration took place in an area called Tuguperliman in the city of Gorontalo.

The yellow and blue wall seen in Street view resembles the one seen in the viral video. Below you can see the comparative analysis of both the photographs.

The above facts confirm that the viral video is not from West Bengal but from Gorontalo city in Indonesia where there was a protest against the Omnibus law.

Conclusion: We found the above post wrong after fact-checking. The viral video on social media is not from West Bengal in India but from Indonesia. The person seen in the video is not a BJP worker but a protestor from Indonesia. 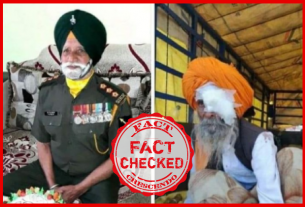 This video does not show Queen Elizabeth II throwing food to Africans. 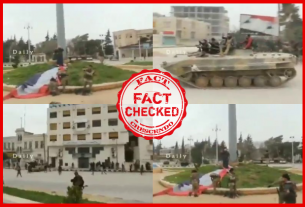