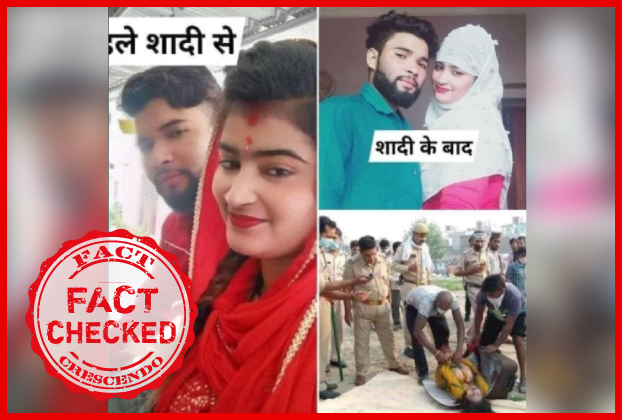 There has been news of hatred and religious boycott on social forums with relation to inter-religious marriages and love jihad, some claims about inter-religion marriages are being made viral, which are either wrong or misleading.According to the claim, a Hindu girl got married to a Muslim boy under the influence of love, and only after a few days after of wedding, the girl’s body was found in a suitcase.

Although we clarified before that the girl seen in the photos is alive and happy with her husband, read further to know the full truth and investigation of this post. Initially, we tried to find out through the keywords whether any such incident has taken place recently where the corpse of a girl was found in a suitcase. As a result, we found some news published in the month of July mentioning that a girl’s corpse was found in the suitcase in Ghaziabad, Uttar Pradesh. According to the Times of India news published on 27th July 2020, the girl has not been identified. This news was also reported by Mirror Now.

After that we contacted SP Abhishek Verma of Ghaziabad city. “The picture of the corpse in a suitcase, surrounded by police, in the viral post is from Ghaziabad itself. About a month ago, the body of a girl was found inside a suitcase but the identity of the girl has not been confirmed as yet and further investigation is on.”

When we shared other viral pictures along with the picture of the corpse with SP Abhishek Verma, he clarified that the girl seen in the picture and the dead girl found in the suitcase are different; there is no similarity between the two. Apart from this, he sent us some pictures of the dead girl that were being circulated on social forums for the purpose of identification.

Thereafter, we compared the picture of the dead girl with the picture of the girl being made viral, but we did not see any similarity between these two pictures. After this, we searched for more pictures through a reverse image search and found information on a Facebook group where the girl seen in the pictures was mentioned as being from Gorakhpur Chowk, Dehradun (Uttarakhand).

Looking at it closely, we contacted the SP of Dehradun Shweta Choubey, who said “There is no such recent incident related to love-jihad in Dehradun in which a girl was murdered or her corpse found in a suitcase.

When we contacted Sweety Chauhan Pasha, she told us that, “The pictures used in the viral post are mine and I have nothing to do with the news of the corpse found in the suitcase. No such incident has happened with me and I am safe and sound.”

After this, she also confirmed that the picture that went viral belongs to her and her husband, his name is Ehkam Elias Mohammad Adil Pasha. Sweety Chauhan Pasha shared her Aadhar card as identity proof which confirmed that her name is Surbhi a.k.a Sweety Chauhan Pasha. Apart from this, she has also sent us a current picture of her and her husband.

Conclusion: After fact-checking, we confirmed that the above claim is false. The viral picture belongs to Surbhi a.k.a Sweety Chauhan Pasha, who is currently living in Dehradun and she is alive and healthy. The picture of the corpse found in a suitcase surrounded by police is from Ghaziabad,Uttar Pradesh and it has no relation with Sweety.

Title:The viral images and claims about love jihad are unconnected and incorrect 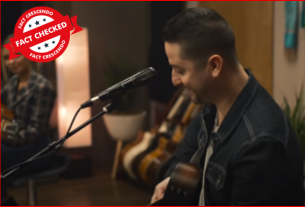 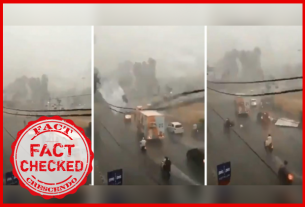 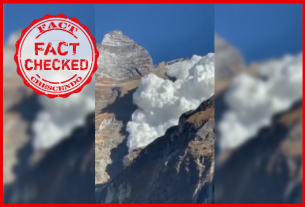