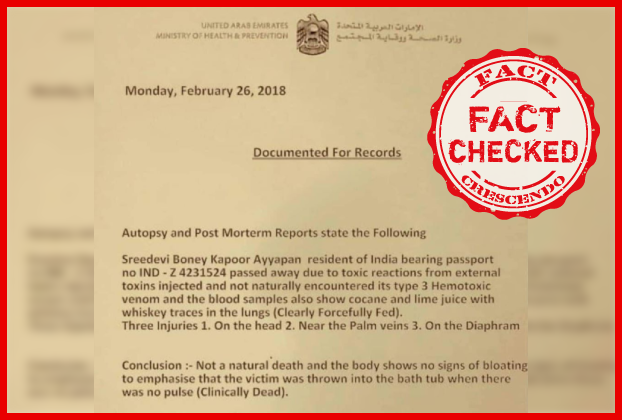 Soon after the demise of actor Sushant Singh Rajput, there has been a lot of uproar in social media condemning Nepotism in Bollywood.  In the midst of all this, a viral post on social media now claims that Kangana Ranaut has shared many sensational details related to actress Sridevi’s autopsy report through social media.  According to the alleged autopsy report, Sridevi was apparently given an overdose of cocaine and whiskey, along with three injuries to her body, and it was not a natural death. The viral report states that Sridevi died “due to toxic reaction caused by injecting external toxins into her body.” This report clearly states that Sridevi’s death was not caused by natural reason.”

The letterhead of the ‘United Arab Emirates’ Ministry of Health and Prevention can be seen in this autopsy report.

This report also claims that the actress was dumped in the bathtub when there was no pulse. Let us tell you that Sridevi was found dead on February 24th, 2018 in the bathtub of her hotel suite in Dubai.

We started the investigation by searching the above news through keywords on Google, as a result we did not get any reliable news confirming that Kangana Ranaut has published Sridevi’s autopsy report on social media forums. Looking at this autopsy report carefully, we noticed errors in the grammar of this report, which you can see below.

It is known that on February 26th, 2018, two days after the death of Sridevi, the authorities in Dubai confirmed from their official Twitter account that the cause of death of the Indian actress Sridevi occurred due to drowning in her hotel apartment’s bathtub following loss of consciousness.

On searching keywords on Google, we found many news reports published in 2018 related to this, which had also published the official death certificate of actress Sridevi, according to which, she died due to accidental drowning.

Conclusion: After fact-checking, we found the above post incorrect. It is clear that the viral “autopsy report” of Sridevi’s death on social media is fake. It is neither shared by actor Kangana Ranaut, nor has it been published by any authentic source from the Dubai government. 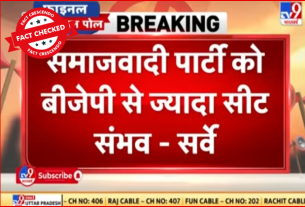 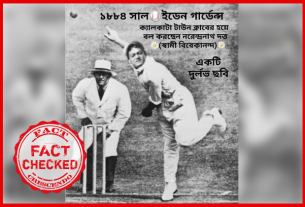 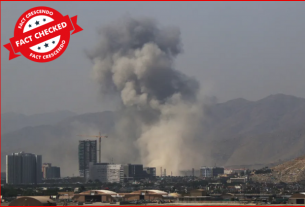