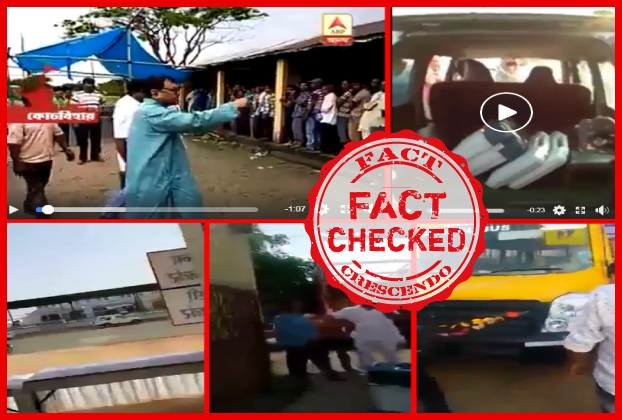 A facebook user, Prince Abraham has published the above embedded post on Facebook with the following caption in Malayalam whose translation is as such: “The figure of 300 is not projected casually…New model has arrived, Modi’s Make In India EVM! Watch with your eyes wide open.” The post contains five videos. The first video shows a man in blue coloured kurta, threatening people inside a polling booth. The second video shows people surrounding a car carrying EVM machine, the people can be heard saying that the EVMs are being stolen for manipulation. The third video is from UP in which a man is claiming that without the knowledge of the candidate reserve EVMs were brought into strong room. The fourth video shows EVMs being loaded on to a truck that has no security around it. The fifth video shows a school bus loaded with EVMs. It seems that the school bus containing EVMs were intercepted by people who then started taking the video of the bus. So are these videos conclusively proving the allegations that are leveled by means of this post? Let’s find answer to this question by analyzing the facts.

Let’s consider each video individually. We have already debunked most of these videos earlier except for a few. We have investigated these few videos as well and have come up to a conclusion. Let’s find out the truth behind each video.

This video is of a TMC leader from Cooch Behar named Abdul Jalil Ahmed. Abdul Jalil Ahmed in his blue kurta can be seen threatening the polling agents after he campaigns for TMC inside the polling booth. The video is a year old and was taken during Panchayat elections in West Bengal. The video is not related to context presented in the post and doesn’t support the argument posed by the publisher. We had debunked a post that claimed that this video is of a BJP candidate who is threatening poll officials. To read the story on this video in Malayalam, please visit the link given below.

2.Second video: EVMs found in a car in Punjab.

An Aam Aadmi Party supporter named Shalu had tweeted the video on Twitter stating: some facts and evidence of EVM and filthy Game of BJP.

EVM machines found in a car with no security in Punjab.

We found a report by The Tribune in which the Chief Election Officer of Punjab Dr. S. Karuna Raju has clarified that these EVMs were being carried in the car of sector officer Balwinder Singh and he was accompanied by the official videographer Manish Sharma. The vehicle had GPS installed for tracking purpose. To read the article please visit the following link.

3.Unpolled EVMs needing repair being brought to the strong in city magistrate’s car in Jhansi.

The above image shows the letter written by city magistrate to the chief election officer who had sought a clarification on the incident seen in the third video. The city magistrate clarifies that the EVMs being carried were defected and were being brought to the Bhojla Mandi strong room, when the video was broadcasted. The magistrate further adds that the complainant were shown the EVMs and after verifying they were satisfied and the EVMs were kept in strong rooms and the strong room was sealed.

4.Video of EVMs being loaded into the truck while being shifted from Amethi to Sultanpur

The video which was shared on social media claiming that EVMs are being loaded on a truck which was not escorted by security officials or any official from the EC. The EC officials have clarified that the EVMs were being shifted from Amethi to Sultanpur after following due procedures.

We have previously debunked similar claims related to this incident earlier. To read those articles in Malayalam, please visit the following links:

5.EVMs found in a school bus in MP.

The video is from Madhya Pradesh, but it was taken during the assembly elections that happened last year. Public had intercepted a school bus filled with EVMs suspecting it to be a case of EVM malfunctioning. The MP unit of Congress on Twitter also shared the video of this incident and they had sought an explanation from the EC. To which the EC responded with the following tweet:

These were reserve EVMs that were not used for elections and were meant for replacement in case any EVM was found faulty.  We have debunked a similar claim in Malayalam earlier, to read the article please visit the following link:

The videos shared in the post are used out of context and the Election Commission of India has clarified the incidents shown in the videos. Hence, the videos fail to prove the claim made in the post.

Title:Fact Check: Do these 5 videos prove that BJP manipulated EVMs to win more than 300 seats…? 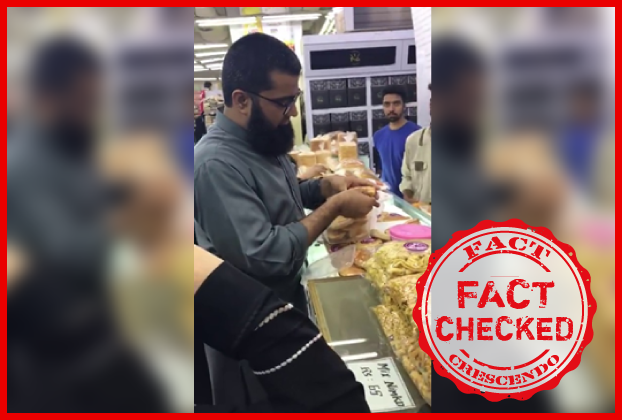 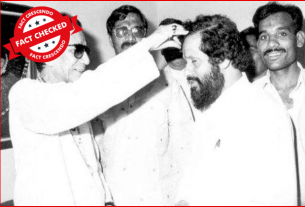 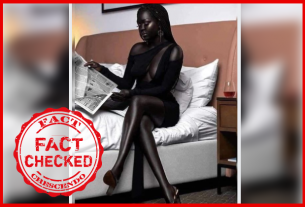